Grove of Whispers - Against the Stream [wh265] 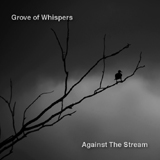 Grove of Whispers - Against the Stream [wh265]

"The man who is swimming against the stream knows the strength of it." --Woodrow Wilson

About the album:
Against The Stream was performed live on stillstream.com June 19, 2013. Done using midi controller, Linux and personal field recordings. Music fashioned using the buddhalizer --a virtual extension of the imagination.

Cover adapted from an image by Nagesh Kamath.

Grove of Whispers is John Tocher. John does the Sadayatana podcast and plays live several nights a week on Stillstream. He also releases dark and experimental music at Buddhist on Fire.

Thanks to all the folks at stillstream.com and electro-music.com for their inspiration and support.

Reviewer: Red Pacific - favoritefavoritefavoritefavorite - December 16, 2013
Subject: SERIOUS STUFF
It is, really. The bird-calls reminded me of children's cries, and the rustling and crackling leaves the footfalls of a doomed soul. Dark, but exquisite piece of music.